"If you haven’t yet stumbled upon this album, seek it out. Anders proves to be a brilliant songwriter, summoning deeply personal lyrics that touch on the universal journey of life. Stylistically, she wends her way through pop, jazz and Americana sensibilities. Her vocals are beautiful throughout. Among the top tracks are “Love Beats Time,” “Astronauts,” “I Can’t Fix You,” ”I Forgot I Was Strong” and “Forgiveness.”
Paul Freeman, Pop Culture Classics

“Aptly takes the listener back to the heyday of singer/songwriters.”
Michelle Mills, San Gabriel Valley News

In the fall of 2009 I emerged from a period of poor health and writer’s block and a flood of songs poured out of me. I’d spent the previous few years mostly writing songs for other artists, but these songs were clearly for me to sing—they were about what it was like to be a woman in mid-life, not a 20-something just starting out. I wrote about the things many people my age deal with, including the highs and lows of being in a long-term relationship, losing a parent, transcending a rocky childhood, forgiveness, and grown-up crushes. That year I’d felt like I was swimming in a river of mid-life issues, so I called the album Swimmer.

"This splendid singer purveys a fresh and intelligent strain of pop of her own creation."  Frank-John Hadley

"She can sing in a sultry purr or a bluesy growl, always in service of the song. It makes Swimmer a nicely varied collection." Darius Rips, oliverdiplace

Tom and I had a blast recording Swimmer, going for an organic production feel that we hoped would be reminiscent of classic singer-songwriter albums from the 1970s. I’m on guitar and piano, Tom’s on guitar and percussion, and we were helped immensely by a slew of great Nashville musicians, including dobro god Jerry Douglas, who plays on “Love Beats Time” and "I Can't Fix You"—on the latter Maura O'Connell sings harmony. Dana Cooper also sings a lovely harmony on "The Good Fight", a song I wrote with the wonderful singer-songwriter Kelleigh Bannen. The amazing Jim Hoke plays dixieland clarinet on “Almost a Beginner” as well as horn and harmonica on several other tracks. One of my favorite tracks to record was "I Forgot I Was Strong"—it’s a soulful collage featuring just drums, bass, and a whole lot of vocals from me, Pru Clearwater, Morgan Bracy, Kathy Hussey, and Barbara Santoro. Other wonderful musicians on the album include Vince Santoro on drums, Dave Francis on bass, Dennis Wage on organ, Kirby Shelstad on marimba and percussion, Mark T. Jordan on accordion, and Rusty Russell on flugelhorn. Ronnie Kimball and Vickie Carrico also added backing vocals.

My personal notes on the different songs on Swimmer are here.

Free shipping within the US.

Newsletters are sent 5-6 times a year and your information is never shared. Join the Susan Anders/Zanna Discs email list for Susan’s newsletter, with her latest news, info about her upcoming vocal workshops and shows, singing tips, singing product information, and sale notifications. 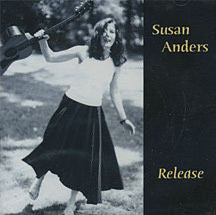